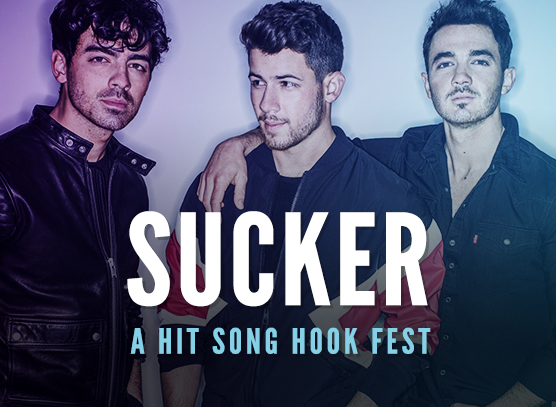 After a six-year hiatus, the Jonas Brothers are back and hookier than ever with their “debut” single, Sucker. The smash hit reached the top spot on Billboard’s Hot 100 in its first week, and at 20 weeks in the Top 10, it’s the group’s most successful single to date, and for good reason – Sucker is a hit song hook fest.

Sucker is chock full of infectious instrumental and vocal hooks that appear both independently and in conjunction with one another throughout the song, taking the song’s memorability and engagement value to a heightened level. Among these hooks are an infectiously funky electric guitar and bass hook that kicks the song off, a whistle hook that is teased and recycled across multiple sections, a playful call and response-style “bonus” vocal hook between the band’s two lead singers in the chorus, and of course, the song’s clever title hook, “I’m a sucker for you.”

In this article, we’ll dive into the many ways Sucker’s writers creatively placed and repurposed these hooks and others across sections, strategically marking the return of the Jonas Brothers with a smash hit that refuses to be forgotten.

This chart reflects hooks that are repurposed in multiple sections. The number in each box corresponds to the number of times that a particular hook appears in a section.

*The song title hook appears in full three times in each chorus and once minus the lyric “you.”

The funky electric guitar foundational hook in the first verse kicks Sucker off in a highly infectious manner. It’s heard twice back to back and remains in effect in the pre-chorus that follows. However, to help keep the hook sounding fresh in the pre-chorus, it’s doubled by electric bass, which provides it with heightened bottom end and power.

Now that the listener has heard the same funky foundational hook melody four consecutive times across two sections, the writers decide to change things up in the chorus with the introduction of a new foundational hook consisting of a Rock guitar chord progression. It’s heard four times throughout the section and, along with other accompaniment changeups, helps to change the song’s vibe from funky to all-out Rock.

In addition to the Rock guitar hook, the listener is hit with four strategically placed iterations of the song title hook, “I’m a sucker for you,” in both similar and subtly differentiated ways, which helps to keep it both memorable and engaging throughout the section. The hook is initially featured as a pickup without accompaniment in the last bar of the pre-chorus, which further helps it to stand out and connect with the listener. It’s then featured twice in the body of the chorus and returns once again tail end without accompaniment, bookending the section on a structurally familiar note.

Furthermore, there’s a “bonus” lyrically repetitive vocal hook featured smack in the middle of the chorus – the engaging “about you” call and response between Nick and Joe Jonas. In addition to creating a secondary infectious hook for the listener to latch onto, the call and response also sets up an engaging moment between Nick and Joe on stage that could also function as an A.P.M. (Audience Participation Moment) between the Jonas Brothers and their audience if they so choose.

Following the chorus, the song’s hooks are changed up once again in the brief two-bar turnaround through the reinstatement of the funky electric guitar/bass hook, which provides the foundation for the super-infectious whistle hook melody heard here for the first time in the song. However, note that only a short fragment of the whistle hook melody is heard. This effectively teases the listener and wets their appetite for its full return later in the song, thus heightening engagement.

Additionally, note that the whistle hook fragment will already sound familiar to the listener whether they realize it or not, as the hook was previously foreshadowed in both the verse and chorus. Bar 1 of the whistle hook is melodically the same as bars 3 and 7 of the verse, although there are slight rhythmic variations to prevent it from being an exact repeat. This melody is similarly seen in bars 3 and 7 of the chorus:

Not a subscriber? Click here to learn more about Hit Songs Deconstructed and use discount code: SAVE10 to save 10% on your subscription!