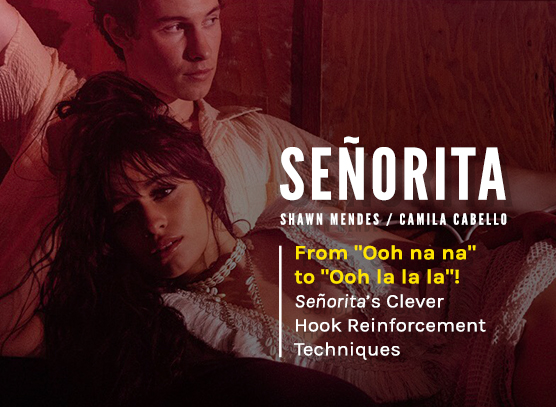 Teaming up for the first time since their 2015 hit I Know What You Did Last Summer, Camila Cabello and Shawn Mendes are back, this time with a Latin flair in their new song Señorita. Shaping up to be one of the summer’s biggest hits, Señorita is a bonified hook fest. However, in contrast to many other hits, the writers cleverly decided to repurpose the main hook melody in a multitude of ways across sections, vocalists, and instruments to ensure that it gets ingrained in the listener’s head but doesn’t wear out its welcome. This hook reinforcement technique helped send other recent hits to the top of the charts, including Closer, Stay, and Cabello’s previous smash, Havana, to name a few.

In this article, we dive into how the technique did the same for Señorita, turning it into one of the most infectious hits of the summer.

This chart reflects hooks that are repurposed in multiple sections. The number in each box corresponds to the number of times that a particular hook appears in a section.

Señorita’s main hook melody is established right at the top of the intro, heard in the staccato, palm-muted electric guitar. This provides a light, retro vibe that works perfectly over the Bossa Nova influenced acoustic guitar, snap and bass accompaniment, effectively establishing the laid-back Latin vibe of the song and hooking the listener with a taste of what’s to come.

With the infectious instrumental hook still lingering in the listener’s head, the hook melody appears once again in the very next section, the chorus, where it’s sung by Cabello, providing the hook with a fresh spin. Here, Cabello also delivers the narrative summation before the listener even knows the song’s backstory, further piquing their interest. At the same time, the listener is introduced to another one of the song’s key hooks embedded within the main melody – the “ooh la la la” nonsense vocal hook. Not only does this hook provide the section with an infectious, fun and seductive vibe, but it harkens back to Cabello’s previous smash, Havana, which features 93 appearances of the similarly infectious “ooh na na” hook. This creates familiarity with her last hit, acting as a calling card in the same way Zedd’s ticking clock sample tags his Hot 100 Top 10 hits Stay, The Middle and Never Really Over. Similarly, Mendes adds his signature acoustic guitar presence to Señorita, which has the same effect as Cabello’s nonsense hooks and Zedd’s ticking clock.

At this point in the song – 33 seconds in – the listener has already heard two variations of the full melodic hook – one instrumental and one vocal – and four iterations of the embedded “ooh la la la” hook fragment – twice instrumentally in the intro and twice vocally in the chorus.

Following the chorus, the writers cleverly reuse the “ooh la la la” chorus vocal hook fragment in the first verse back-to-back, twice with the “ooh” and twice without. However, here the hook is sung by Mendes as opposed to Cabello, which helps keep it sounding fresh and prevents it from becoming redundant. Besides providing the verse with an additional infectious characteristic, the reuse of the “ooh la la la” hook also subliminally keeps the full hook in the back of the listener’s head, heightening anticipation for its return and providing cross-section familiarity to make the song even more memorable.

What’s also interesting about the “ooh la la la” hook is the new connotation with each iteration. The catchy melody is first introduced in the intro using electric guitar without any vocal or lyrical accompaniment. In Cabello’s first vocal chorus, it becomes clear that the “ooh la la la” is a vocalization of the feeling the couple shares when they are around each other – a feeling of mutual overwhelming attraction. Then, in Mendes’ verse, the “ooh la la la” hook is layered in reverb and delay, creating a feeling of nostalgia that jibes well with the lyric, which reveals that this intense, romantic encounter is only a memory.

Not a subscriber? Click here to learn more about Hit Songs Deconstructed and use discount code: SAVE10 to save 10% on your subscription!