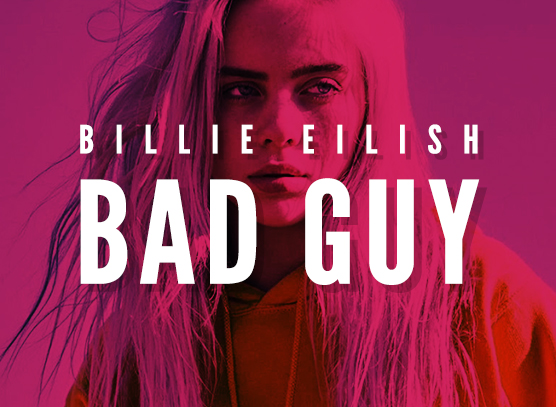 There’s a lot more than meets the eye when it comes to Billie Eilish’s smash hit Bad Guy.

Co-written by hit-making newcomers Billie and her brother Finneas, Bad Guy includes many of the same hit songwriting techniques that veterans like Max Martin, Louis Bell and Tayla Parx have used for years to write chart-topping songs for A-list artists like Ariana Grande, Post Malone and the Jonas Brothers, to name just a few.

In this installment of Technique Spotlight, we shine a light on five of the techniques that helped send Bad Guy to the top of the charts throughout the world – chorus vocal structure, chorus rhyme structure, foundational instrumental hooks, “icing on the cake” hooks, and S.I.A.’s (Section Impact Accentuators).

Chorus Vocal Structure
Bad Guy’s chorus is the epitome of the K.I.S.S. ME principal (Keep It Simple, Singable and Memorable). The section features both an all A main melodic part structure and an all A sub-structure, which essentially means that it’s VERY repetitive. This, in addition to the limited number of pitches, easy to follow melodic progressions and short line length, ensures that the average listener can easily sing along to and remember the chorus. However, to ensure that the K.I.S.S. ME chorus doesn’t become overly redundant, the Eilishes also employ strategic contrast to help keep things sounding fresh and engaging as the section progresses.

Chorus Rhyme Structure
Like its melody, the chorus of Bad Guy features an all A end of line rhyme scheme. However, when you peer in further, you’ll notice that there are a host of other connections as well, such as alliteration, repetitive lyrics and rhyme hook reinforcement, that both cleverly heighten memorability AND prevent redundancy.

Foundational Hooks
Bad Guy’s bass line serves as a foundational hook, delivering the I-IV-V chord progression in an infectious manner throughout much of the song. It makes its first appearance in the intro, where it is initially featured without any additional harmonic accompaniment. This further enables the hook to grab the listener’s attention and hook them into the song, much in the same way that Queen’s Another One Bites The Dust bass hook does. However, it’s Eilish’s vocals in the intro that cleverly help turn this bass line into a hook, in addition to its other contributions to the song.

“Icing On the Cake” Hooks
While each repetitive line in the chorus is infectious and memorable in its own right, the true “icing on the cake” comes in the way of the four-syllable song title hook, “I’m the bad guy”, which appears in the two-bar turnaround directly following the eight-bar chorus. This hook utilizes unique vocal production, a differentiated melody, and an intriguing “cherry on top” spoken element to lead into the synth-focused post chorus and to help Bad Guy stand out from many of its mainstream contemporaries.

S.I.A.’s (Section Impact Accentuators)
Bad Guy uses the Accompaniment Pull Section Impact Accentuator technique (S.I.A.) to great effect at strategic points throughout the song. It is used to transition the verse into the chorus, the first stanza of the chorus into the second stanza, the chorus into the post chorus, and the post chorus into the “surprise” Trap-influenced bridge via the “super impact accentuator” technique. This provides an engaging transitional element that pulls the listener from one section to another in a memorable, distinctive fashion, while simultaneously heightening the impact of the ensuing section and breaking up the song’s repetitive melody.