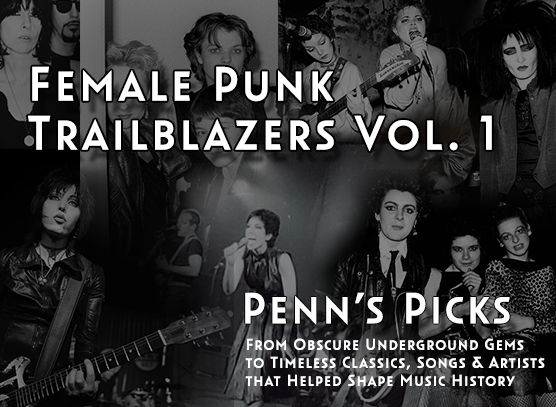 About Penn’s Picks:
From obscure underground gems to timeless classics (and everything in between), Hit Songs Deconstructed Co-Founder, David Penn, gives his personal picks showcasing songs and artists that helped shape music history.

With breakout superstar Olivia Rodrigo currently topping the charts with two punk-inspired songs, it’s the perfect time to pay homage to some of the female punk trailblazers of the late 1970s.

When it comes to punk, it’s historically been male-fronted bands like The Ramones, The Sex Pistols and The Clash, to name just a few, who have typified the genre. But what many people don’t realize is that there are also a host of female bands that have had a profound impact on the punk music scene.

With breakout superstar Olivia Rodrigo currently topping the charts with two punk-inspired songs – good 4 u and brutal – it’s the perfect time to pay homage to some of the female punk trailblazers of the late 1970s.  Not only did these women hold their own and rise above in a male-dominated genre, but they were also pioneers of their time who were not afraid to rock out against social norms.

This Penn’s Picks features my 10 personal favorite, need-to-know female-fronted punk songs from the genre’s early era. While some of the artists will be familiar (The Go-Gos, Pretenders, Joan Jett), there are also some that you’ve likely never heard of before, like The Bags, Kleenex (a.k.a. LiLiput) and Essential Logic. To fully understand and appreciate the punk era, you need to know both.

The Bags were formed in Los Angeles in 1977 and fronted by Alice Bag (aka Alicia Armendariz). One of the rawest, brashest punk bands on both sides of the pond, their power and fury was forever immortalized in the documentary The Decline Of Western Civilization with their performance of Gluttony.

The Go-Go’s: Fun With Ropes

Before their polished hits of the 1980s such as Vacation, Head Over Heels and Our Lips Are Sealed made the Go-Gos a household name, they were down-and-out punks on the Los Angeles circuit in the late 1970s. While lacking in musical ability at the onset of their career, they made up for it in sheer volume and attitude. One of the best representations of the band during this time period is Fun With Ropes, which they continued to play on and off throughout their career.

Essential Logic were formed in the UK in 1978 and fronted by Lora Logic (ex-saxophonist for X-Ray Spex). Teetering between punk and the emerging post-punk scene, their raucous yet highly grooving Aerosol Burns is one of the punk’s hidden treasures (HSD masterclass attendees – note the hook foreshadowing in the intro!)

Kleenex (also known as LiliPUT), was an all-female punk band formed in Switzerland in 1978. In addition to their raw, punk attitude, they were also one of the more musically adventurous on the scene, fusing disparate styles including pop, alternative and avant-garde, singing in multiple languages, and using non-typical punk instrumentation like the saxophone. Two songs that exemplify their eclectic stylings are Die Matrosen (replete with a super-infectious whistle hook) and Heidi’s Head, which hammers home its infectious melody over and over along with brief Yoko Ono-styled interjections.

X-Ray Spex: Oh Bondage! Up Yours!

X-Ray Spex were formed in London in 1976 and fronted by the legendary Poly Styrene (a.k.a. Marianne Joan Elliott-Said). Raw, powerful and eclectic, even Johnny Rotten of the Sex Pistols – who distained most bands of the time – had an affinity for X-Ray Spex, calling them “superb.” Their song, Oh Bondage! Up Yours! showcases the band firing on all cylinders, including the iconic opening line, “Some people think little girls should be seen and not heard, but I think, oh bondage, up yours!”

Formed in England in 1978, The Pretenders were, and still are, led by iconic American-born frontwoman Chrissie Hynde. While more well known for their rock and new wave hits such as Brass In Pocket and Back On The Chain Gang, the band could also go full-out punk, which is most evident on their snarling, sneering 1980 release, Tattooed Love Boys.

X: Beyond And Back

X stood out as soon as they hit the Los Angeles punk scene in the late 1970s and continue to stand out until this day. Co-fronted by girlfriend and boyfriend Exene Cervenka and John Doe, the band effortlessly blends raw, unrefined attitude with stellar musicianship across an array of styles including punk, rockabilly and alternative. Evidence of the band at the peak of their powers can be heard in 1980’s Beyond And Back. (Bonus fact: Ray Manzarek of The Doors produced and played keys on their first album, and John Doe played the role of Jim Morrison in The Doors’ LA Woman video).

Siouxsie and the Banshees: Love In A Void

Formed in London in 1976, Siouxsie and the Banshees were fronted by the legendary and eclectic Siouxsie Sioux (a.k.a. Susan Janet Ballion). Starting out as pure punk, Siouxsie soon gravitated toward the burgeoning post-punk movement and eventually to goth (both of which she helped invent and define) before heading in a more overt pop direction in the mid-to-late 1980s. However, it’s her early punk leanings that created some of the most intriguing music of the era, with one of the most notable being 1979’s Love In A Void. As loud, brash and primal as it is, underneath are undeniable melodies and hooks that ensure the song gets fully ingrained in the listener’s head. (Bonus fact: The guitarist in the video is none other than The Cure front man Robert Smith, who was often pulling double duty in both bands from 1979 through the early 1980s).

The Slits: Love And Romance

The Slits are a London-born band formed in 1976, consisting mainly of female members. Similar to Siouxsie and the Banshees, they evolved from pure punk into more diverse stylings, including post-punk, dub, world and avant-garde. A great example of the band of at the height of their early period powers is the eclectic Love And Romance.

Joan Jett has embraced the punk attitude throughout her entire career. Following her start with the all-girl group The Runaways in the mid-to-late 1970s, she eventually branched out on her own and formed The Blackhearts. Among their most notable hits are reworked renditions of  The Arrows’ I Love Rock ’n’ Roll, Tommy James and the Shondells Crimson and Clover, Garry Glitter’s Do You Wanna Touch Me, and her own seminal hit, Bad Reputation – the most overtly punk of them all.