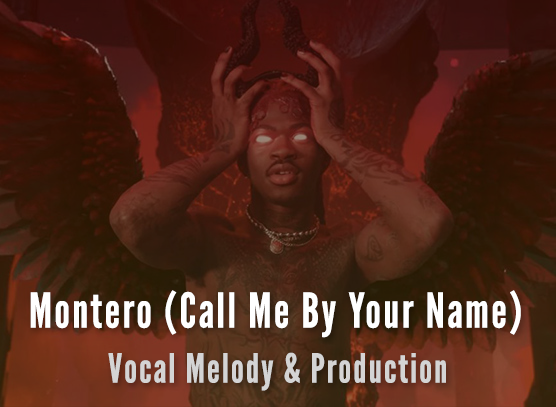 The vocals in Lil Nas X’s #1 hit Montero (Call Me By Your Name) are much more than meets the eye.

As with any hit song, Lil Nas X’s most recent #1 hit Montero (Call Me By Your Name) has a slew of characteristics that contributed to its success, including its engaging arrangement, impactful lyrics and unique blend of genre influences.  But perhaps the song’s most notable quality is its super-infectious vocal melody and standout vocal production.

Looking at the former, Montero’s lead vocal melody is much more than meets the eye. On the surface, it’s all that one would expect from a hit song: it largely adheres to what Hit Songs Deconstructed calls the K.I.S.S. ME principle (Keep It Simple, Singable and Memorable), complete with logical and easy-to-sing melodies, simplistic stepwise motion balanced with engaging intervallic leaps, ample repetition balanced with engaging developments across stanzas and sections, and short to mid-length phrases.  This principle is seen perhaps most prominently in the song’s vocal hooks, which are first established in the chorus and then melodically reinforced in the post-chorus in a fresh but familiar manner.

Montero also features one key melodic device that often goes unnoticed by the average listener: motifs. Throughout the song, Lil Nas X and his co-writers sprinkle in repeated motifs and hook foreshadowing, helping to make the song that much more memorable and infectious in an under-the-radar manner. This technique, combined with the song’s infectious K.I.S.S. ME melodies, ensures that Montero will not be easily forgotten.

Montero (Call Me By Your Name)‘s Vocal Melody

When it comes to vocal production, Montero’s effects and processing span the gamut.  Throughout the song, the verses, pre-choruses and outro all generally feature minimal processing, which provides an organic, human vibe.  In contrast, the choruses and vocal breaks feature more prominent processing, including effected reverbs, distortion, and pitch and formant shifting that create highly unique timbres.

Over the course of the song, Lil Nas makes use of a variety of techniques to deliver the narrative and melody in a highly engaging manner. Among them are the blend of a deep, powerful chest voice with a higher, lighter falsetto and the use of varied vocal delivery styles including sung, hummed and spoken vocals.

And as with most of his songs, his performance integrates both pop and hip hop stylings.  Not only does this keep the song consistent with his previous body of work, but it also helps to cross-pollinate across genres, making the song more appealing to a larger audience.

Subscribers can view the entire Montero Deconstructed report here, including a full analysis of Montero’s vocal melody and production as well as its structure, instrumental arrangement, energy, lyrics, and much more.

Subscribers also have access to the entire HSD song report library, including full 100+ page reports on recent hits such as Drivers License, Blinding Lights, Don’t Start Now, I Hope, and Bad Guy, to name a few.