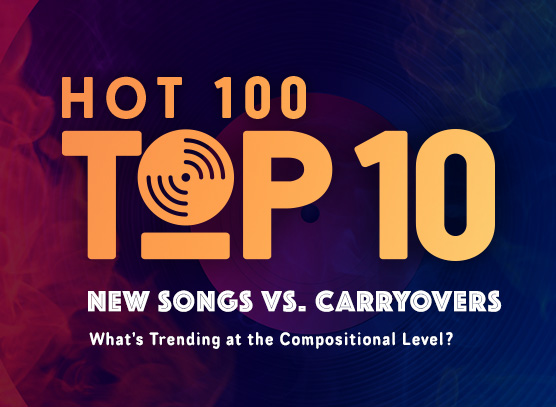 With the first quarter of 2022 behind us, we decided to take an even more micro look at the Hot 100 Top 10 to see what might be on the horizon for 2022’s most successful songs at the compositional level. To do this, we focused on Q1 2022’s new arrivals (i.e. those that entered into the Top 10 for the first time during the quarter) and compared them to the songs that carried over from Q4 2021. What follows are a few key highlights from the full article.

One of the most marked differences was in primary genres. Songs that carried over into this year’s first quarter were more pop-heavy, with 75% pop, 13% hip hop/rap, and 13% R&B/soul. On the other hand, Q1 2022’s new arrivals had a decidedly more diverse array of primary genres, with 33% hip hop/rap, 22% pop, 22% rock, 11% dance/club/electronic, and 11% Latin. This marked the highest level in four or more quarters for rock, dance/club/electronic, and Latin, as well as the lowest level in four or more quarters for R&B/soul, with zero new arrivals.

The quarter’s wide genre spread is thanks in part to the Dua Lipa and Elton John collaboration with Australian dance music trio PNAU, Cold Heart (PNAU Remix), as well as Lin-Manuel Miranda’s record-setting #1 hit from Disney’s Encanto, We Don’t Talk About Bruno, providing the dance/club/electronic and Latin genres with some representation, respectively. Additionally, hip hop held the most new arrivals in Q1, thanks to Do We Have A Problem?, Pushin P, and Super Gremlin, joining the quarter’s lone hip hop carryover song, Lil Nas X and Jack Harlow’s Industry Baby.

Another key difference between the quarter’s new arrivals and carryover songs lies in the gender of the lead vocalist. While male led vocals remained the most popular, the margin shifted significantly, from 75% of carryover songs down to 44% of new arrivals. The drop in new arrival male-led vocals was countered by a rise in male/female vocals (33%), thanks to Cold Heart (PNAU Remix), Do We Have A Problem?, and We Don’t Talk About Bruno. Female led songs remained fairly consistent at around a quarter of songs.

There were also some notable differences in terms of song structure. The use of a pre-chorus was halved, from 50% in carryovers to 22% in new arrivals, due in part to the increased prominence of hip hop where pre-choruses are far less common than in other genres. And the use of a “D” (departure) section similarly was halved, down from 100% of carryovers to 56% in new arrivals.

What to learn more about how the Hot 100 Top 10 is evolving? Hit Songs Deconstructed subscribers can click here to access the full article. Not a subscriber? Click here.

Below is a playlist of the songs referenced in the article: