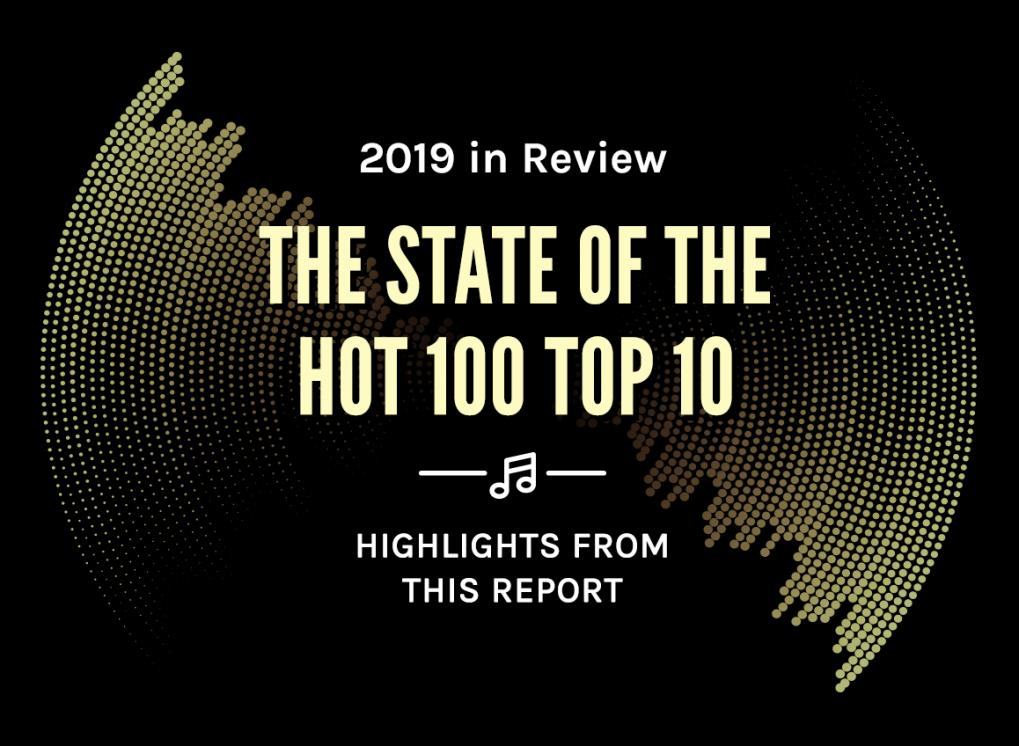 The State of the Hot 100 Top 10 takes an in-depth look at compositional trends related to the songs that land in the Hot 100 Top 10 as well as how the artists, writers, producers and labels behind them are evolving.In 2019, there were 58 songs, 57 credited performing artists, 236 credited songwriters, 90 credited producers, and 14 record labels that landed in the Top 10 of the Billboard Hot 100.While in 2018 the vast majority of #1 hits were Hip Hop songs, of the 15 songs that charted at #1  in 2019, 11 were Pop, three were Hip Hop and one was R&B. The pack was led by Lil Nas X’s mega-hit Old Town Road, which features an infectious blend of Country and Hip Hop influences, meme-ready lyrics and a superstar featured artist that helped the song gallop to the top spot, where it remained for a record-setting 19 weeks.  Post Malone was the top artist of 2019, with six Top 10 hits and two #1s. Equally impressive is that he had at least one of his songs in the Top 10 throughout almost the entire year (51 weeks). Malone was also a credited writer on all six of his songs. Louis Bell was the top behind the scenes writer for the second year in a row, scoring eight Top 10 hits, six of which were co-written with Post Malone, and four #1 hits.Republic was the dominant record label for the sixth straight year with 19 Top 10 hits. The majority of its hits were Pop songs as opposed to Hip Hop – the opposite of what it was in 2018.When comparing Hot 100 Top 10 songs from 2018 to 2019:

Some other notable trend shifts in 2019 were Alt/Indie as a sub-genre almost tripling in prominence during the second half of the year, an increase in non-electronic instrumentation, and the percentage of songs landing under three-minutes in length skyrocketing in popularity.

What other shifts are we seeing in the Top 10 landscape?

On Monday, February 3rd, Hit Songs Deconstructed will release its 100+ page year-end trend report, The State of the Hot 100 Top 10.

For a sneak peak of some of the findings, download this PDF with select highlights from the report!

GET YOUR COPY OF THE FULL REPORT TODAY!

This 100+ page super easy-to-digest infographic report will get you in tune with how today’s most successful songs, and the players behind them, are evolving.

ORDER YOUR COPY OF THIS REPORT