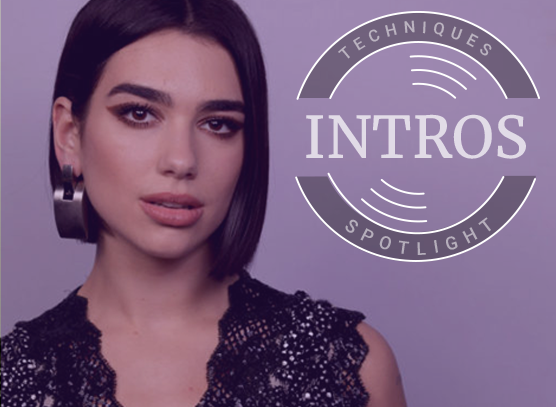 A methodically thought out intro can achieve so much more than just grabbing the listener’s attention. Whether it adheres to trends or goes against them, heightens familiarity or does the unexpected, a highly effective intro can help prime a song for maximum impact right out of the gate.

A great case in point is Dua Lipa’s current smash, Don’t Start Now. Since its release, the song has landed in the Top 10 on over 50 charts throughout the world, including hitting the top spot in the US on the Billboard Dance Club Songs chart. In this article, we dive into all of the intro techniques used to set the song up for success.

Clocking in at only 10 seconds in length, Don’t Start Now’s intro features a highly engaging multipart structure that achieves a lot in a short amount of time. It consists of three distinct arrangements that function to grab the listener’s attention, hook them in, fake them out, tease an infectious melody of a forthcoming section and establish the overall vibe. While the use of the multipart intro technique is quite atypical in recent Hot 100 Top 10 hits (it was used in only 17% of songs since 2019, most of which are Hip Hop songs), Don’t Start Now is proof positive that its methodical implantation can set a song up for success.

The song begins with a brief two-second tension-building riser that leads the listener into the pronounced, attention-grabbing piano stab at the top of bar 1. Note that this riser/attention-grabber technique has been used in other recent Hot 100 Top 10 hits as well, such as Halsey’s Bad At Love and Ariana Grande’s God Is A Woman. The piano then goes on to play a tension-heightening chord progression that perfectly supports Lipa’s infectiously sung “If you don’t wanna see me” lyric. This problematic lyric works together with the tense, minor chord progression to achieve strong prosody, which further heightens the listener’s emotional connection with the song right from the start.

Further supporting the vocal are claps, synths and a low-level vinyl crackle effect, which achieve a few key things: the claps establish a backbeat groove and put the song in tune with current trends (since 2016, over half of all Hot 100 Top 10 hits have featured claps in the mix); the synths establish the song’s Electropop/EDM vibe and heighten tension and anticipation due to their swelling, filter-swept qualities; and the low-level vinyl crackle effect provides the song with an underlying retro vibe, which, along with other elements in subsequent sections, provides engaging contrast against the song’s otherwise modern, polished sound.

Together, these instruments create a tension-filled intro that leads the listener to believe that some super-infectious grand payoff might be following, as most tension builds in this style precede either a chorus or, in the case of Dance/EDM songs, an instrumental break drop. Instead, the listener is “faked out” by a sudden full accompaniment pull in the last bar of the intro, leaving only the vinyl crackle effect, a bass slide, and Lipa’s verse 1 pickup, “Did a full 180.” This was a clever lyrical choice, as the instrumental accompaniment also does a “full 180” at this point, shifting from the intro instrumentation into an infectiously groovy Funk and Disco-based arrangement. This pronounced and clever shift effectively takes the listener’s engagement to the next level, setting the tone for the highly infectious roller-coaster ride of a song they’re about to go on.