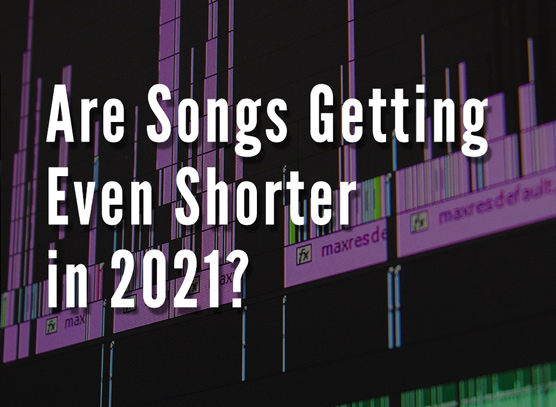 Are Songs Getting Even Shorter in 2021?

Shorter song lengths are currently one of the hottest trends in today’s mainstream.

Does this trend hold true for #1 hits as well?

The rise among chart-toppers has been even more drastic. From 2018 to 2019, the number of #1 hits landing under three minutes more than quintupled to nearly half of all songs. After a dip down to one-quarter of songs in 2020, it drastically shot back up once again to nearly two-thirds YTD 2021 (as of chart dated 8/28/21). 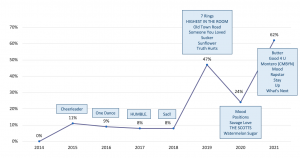 So why the drastic surge in super-short songs?

One possible reason is short audience attention spans due in part to the popularity of streaming and rapid-fire content apps like TikTok. When songs are kept short, listeners have less time to get bored and lose interest; by the time they get the urge to skip to the next song, it’s already over. Hit and run songwriting, so to speak. And this goes hand-in-hand with another possible reason: to garner repeat listens. By keeping songs short, listeners may be more inclined to go back for another listen, which lends itself well to today’s streaming era.

How are writers keeping their songs so short?

The methods used to shorten a song’s length plays a huge role in keeping today’s fast-paced listeners engaged. Among them are shortening the length of sections, which results in more frequent material turnover; omitting “optional” song sections like the intro, pre-chorus, post-chorus, bridge or outro; and/or using faster tempos to bring the song to a quicker conclusion.

A perfect case-in-point is The Kid LAROI and Justin Bieber’s Stay, which is currently the shortest #1 hit of 2021.

It employs all the aforementioned techniques to keep its length down to an exceptionally short 2:15:

And of course, the song would not be complete without its stellar melody and hooks, all of which are highly repetitive and help to keep the song memorable despite its short length. Together with the song-shortening techniques above, this helped prime Stay to succeed among mainstream audiences’ ever-shortening attention spans, ultimately helping it rise to the top spot on the chart.