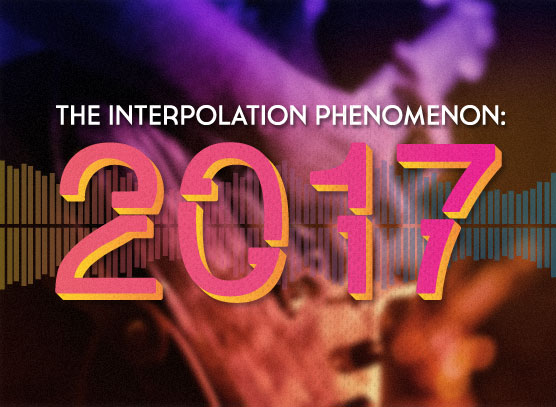 What do diverse 2017 mega-hits Shape Of You, Closer, Look What You Made Me Do, Feel It Still and Body like A Back Road all have in common?

They all interpolated a vocal or instrumental melody from a proven hit. For those of you not familiar with the term, interpolation is when an aspect of a previously recorded song is re-recorded for use in a new song. This technique is nothing new – from Led Zeppelin to The Sugar Hill Gang to Fall Out Boy and beyond – many artists since the advent of popular music have used interpolation to great success.

Aside from sounding great, there are two key benefits of interpolating a melody from a proven hit – it’s already been tried, tested and proven to be effective with a wide audience (the numbers don’t lie), and it imparts familiarity, which makes it easier for the new song to connect.

What follows are five of the most notable hits from 2017, and the “already-a-hit” melodies from the past six decades that they used to take their success potential to a heightened level.

Ed Sheeran’s mega-hit Shape Of You interpolates the chorus vocal melody from TLC’s 1999 hit, No Scrubs. A big hit in its day, No Scrubs charted in the Top 10 on over 20 charts throughout the world, and peaked at #1 on the Billboard Hot 100, Top 40, R&B/Hip Hop and Rhythmic charts.

What’s interesting is that Shape Of You co-writers Sheeran, Mac, and McDaid decided not to use this proven melody in the chorus, as one would expect. Instead, it’s featured it in the pre-chorus.

Shape Of You went on to become one of the biggest hits of 2017, hitting #1 on over 50 charts throughout the world, attaining the record for most weeks in the Top 10 of the Hot 100 (33), and becoming Spotify’s most streamed song ever (1.3 billion streams and counting).

Shape Of You: Pre-Chorus Vocal Melody

Look What You Made Me Do, the lead single from Taylor Swift’s 2017 album, Reputation, interpolates a vocal melody from Right Said Fred’s 1991 hit, I’m Too Sexy. A huge hit for Right Said Fred, I’m Too Sexy landed in the Top 10 on over 10 charts throughout the world, peaking at #1 on over five including the Billboard Hot 100.

Since its release, Look What You Made Me Do charted in the Top 10 on over 50 charts throughout the world, peaking at #1 on over 20.

Look What You Made Me Do: Chorus Vocal Melody

Ever wonder why you can’t get The Chainsmokers’ Closer out of your head? Because the writers took a hook from The Fray’s 2015 hit, Over My Head (Cable Car) and incorporated it into EVERY SECTION of the song. In order prevent the hook from becoming overly redundant, multiple variations were utilized including five instrumental variations, each with a different timbre, and 5 vocal variations, including male, female and pitch processed.

Since its release, Closer landed in the Top 10 on over 40 charts throughout the world, peaking at #1 on over 25 including the Billboard Hot 100, Adult Top 40, Hot Dance/Electronic Songs and Mainstream Top 40 charts.

Closer: Instrumental & Vocal Melody in Each Section of the Song

Over My Head (Cable Car): Instrumental Melody in Various Sections

Feel It Still’s infectious chorus vocal melody made its debut over 50 years ago in the Marvelettes 1961 hit, Please Mr. Postman. This melody helped launch Please Mr. Postman to the top of the charts and attain the distinction as Billboard’s #22 greatest girl group song of all time.

More than a half-century later it helped Portugal. The Man attain the biggest hit of their career with Feel It Still. Not only is it a great melody, but it also successfully jibes with and accentuates the song’s retro 1960s vibe and bolsters its cross-generational appeal.

Additionally, Feel It Still begins with the lyrics, “Can’t keep my hands to myself,” which are the same lyrics featured at the beginning of Selena Gomez’s 2016 hit, Hands To Myself. Both opening lines feature a similar vocal melody as well. While this might not be apparent to Portugal. The Man’s core Rock audience, the commonality bolsters the song’s familiarity with a mainstream Pop audience.

To-date, Feel It Still has landed in the Top 10 on over 20 charts throughout the world, cracked the Billboard Hot 100 Top 5, crossed over into the US Rhythmic and Dance/Club Song Charts, and hit at #1 on four Billboard charts including the Adult Top 40, Alternative Songs, Hot Rock Songs and Mainstream Top 40 charts.

Hands To Myself: Opening Line

Sam Hunt’s Body Like A Back Road was the first Country single to land in the Top 10 of the Hot 100 since the Florida Georgia Line / Nelly collaboration Cruise back in 2013. In addition to its Pop, Hip Hop, Trap and R&B/Soul influences, the chorus vocal similarity with Flo Rida’s 2016 hit, My House, bolstered its familiarity and connection potential with a mainstream Pop audience.

Note: Songwriters for the interpolated songs were given credit on Closer, Feel It Still, Look What You Made Me Do and Shape Of You

About the Hit Song Deconstructed Report:

Our flagship report, it provides an unparalleled deep dive into the inner-workings of a current chart-topping hit, and leaves no stone unturned. Presented in a practical manner through a combination of charts, graphs, notation and commentary, the reader comes away with a full understanding of the what, how and why behind how the hit was written and produced, and gains a wealth of songwriting and production techniques to add to their toolbox. Among the many areas covered are song structure, energy, genres and influences, instruments and accompaniment, harmony, vocal production and melody, lyrics, rhymes, narrative, Top 10 benchmarking and more.