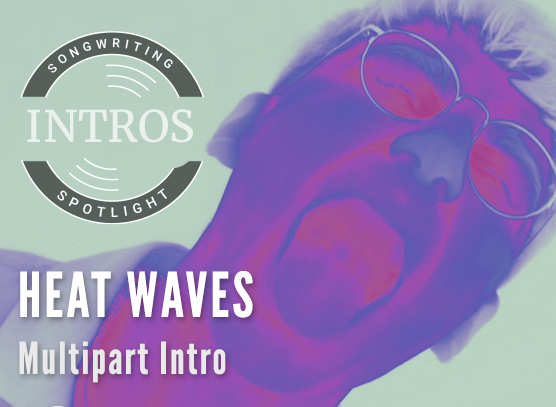 Heat Waves’ intro clocks in at a super-lengthy 41 seconds and 14 bars in length, making it the longest non-hip hop Hot 100 Top 10 intro in over five years. But in a world of waning attention spans, how did the song’s intro keep listeners tuned in?

The answer is what we at Hit Songs Deconstructed call the multipart intro technique, in which a song’s intro contains multiple segments that often serve multiple purposes.

Starting from the beginning, the first six bars of Heat Waves kick the song off with a sparse arrangement featuring the chorus vocal melody over an electric guitar and kick/clap accompaniment, all of which are put through a lo-fi-sounding filter. And together they achieve a few key things, including:

A synth effect is also added to the mix in bar 4 to subtly heighten interest and build toward the next higher-energy segment 2, which is directly preceded by an abrupt fadeout and tom hit that heightens the impact of the full arrangement.

Over the next four bars, the listener is locked into the fully developed, high-fidelity groove, which now also includes snare, hats and a synth pad. Note that while the vintage effect is gone, the song maintains its alt/indie vibe through the guitar’s unique, wavy processing.

In the final four bars of the section, a pitch and formant-shifted vocal enters the mix over the groove established in segment 2, which provides continuity and allows full focus to be on the new unique vocal without distraction.

And in addition to heightening interest, this repetitive effected vocal also achieves a couple of other key things, including:

The intro then closes out with a sudden full accompaniment pull S.I.A. (section impact accentuator) and drum hit. This effectively provides separation between the intro and chorus and allows the chorus, which features the vocal that was initially teased in segment 1 but now in full fidelity, to hit with higher perceived impact.

Subscribers can also view the following songs recently added to our Techniques Library for even more intro techniques!

Not a Subscriber?  Click here to learn more about the Hit Songs Deconstructed platform, or click here to view our subscription options!