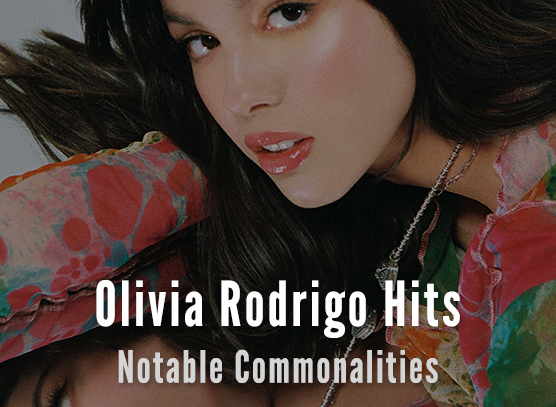 Many fans tout the stylistic range of Olivia Rodrigo’s music, noting her impressive flexibility in shifting from heart-wrenching ballads to all-out pop punk to indie folk with ease. But just how diverse is her body of work?

Since drivers license hit #1 on the Billboard Hot 100, Olivia Rodrigo has quickly become a household name and one of the most sought after performers in music.  In addition to drivers license, she has racked up an impressive three Hot 100 Top 10 hits – good 4 u (#1), deja vu (#3) and traitor (#9) – from her debut album SOUR, making her one of the most successful breakout artists in recent history.

While her Top 10 hits may be stylistically different, there are actually a host of commonalities that act as a cohesive thread through all four and, in some cases, through her entire album.  These commonalities help to shape Rodrigo’s sound and image as an artist and create familiarity across her work, while the varied styles of each song keep things interesting.

One notable commonality across Rodrigo’s body of work is her chorus hook arrangement, in particular the use of the “down below” hook technique where the hook is featured at the end of the chorus to close it out on a memorable note.  All four of her Top 10 hits, along with two additional songs off the album and her 2019 single All I Want, feature a “down below” hook paired with a full or partial accompaniment pull to bolster the hook’s impact. While this technique is common in the Top 10 and can be found in other recent hits including Leave The Door Open, Before You Go, and 7 Summers, its abundance in Rodrigo’s body of work is exceptionally notable.

But perhaps the most notable commonality across Rodrigo’s body of work is her lyricism. Eight of the 11 songs on her album – including all four of her Hot 100 Top 10 singles – are about a breakup.  More specifically, the songs are speculated to be about the end of her relationship with High School Musical: The Musical: The Series co-star, Joshua Bassett, who then supposedly started dating fellow actress Sabrina Carpenter. This personalized subject matter, which has successfully created a lot of media buzz around Rodrigo’s name, is right out of the playbook of one of the singer’s biggest inspirations, Taylor Swift, who is an expert at creating “soap opera” intrigue for her fans. And speaking of Swift, her influence can be found in other areas as well, such as the nearly identical bridges in deja vu and Swift’s Cruel Summer; the interpolation of Swift’s New Year’s Day in 1 step forward, 3 steps back, resulting in a writing credit for Swift on the song; and the similarities between the conversational, quasi-spoken verse 2 vocals in both good 4 u and We Are Never Ever Getting Back Together, to name a few.

Additional lyrical commonalities across Rodrigo’s four Hot 100 Top 10 hits that are a bit less obvious include the introduction of an ex and his new girlfriend in the first verse, retrospective lyrics that look back at the happy moments in the relationship, the use of similarly processed “ah” or “ooh” group backing vocals, and references to driving or cars, which is the case in all except for traitor. Drivers license features a driving theme throughout the entire song, deja vu features lyrics about “car rides through Malibu,” and good 4 u references her ex’s new car.

With so many lyrical commonalities across songs, Rodrigo’s album certainly ran the risk of becoming one-note.  But the singer had a solution to this issue.  In addition to the genre changeups across songs, Rodrigo also uses a wide array of emotions throughout the album to balance all of these lyrical commonalities and prevent redundancy, ranging from heartbreak (drivers license, favorite crime) to jealousy (happier, deja vu) to anger (good 4 u, traitor) and beyond. This not only keeps things interesting and increases Rodrigo’s own personal connection with the songs, but it also makes the songs and Rodrigo herself more relatable to her core teen fanbase, who can identify with first love heartbreak more than anyone.

Ultimately, Rodrigo’s effective and delicate blend of familiarity and originality has enabled her to successfully connect with her target demographic and create a cohesive body of work that is equal parts recognizable, relatable and intriguing.

Not a subscriber? Click here to learn more about the Hit Songs Deconstructed platform.