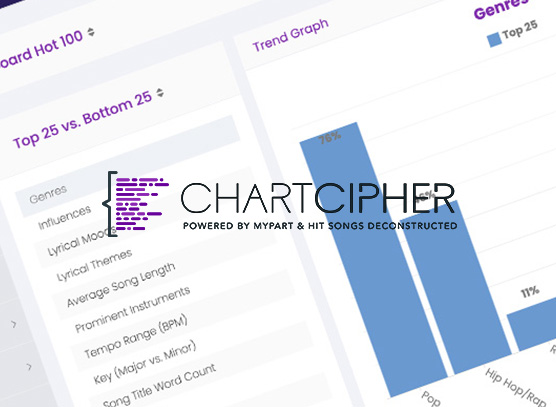 MyPart and Hit Songs Deconstructed Partner to Launch ChartCipher, the Next Generation of Hit Song Analytics

Matan Kollenscher, MyPart CEO, explains, “The depth of ChartCipher’s song analysis provides unprecedented insight into the DNA of hit songs across genres going back to the beginning of this century. We are thrilled to be partnering with Hit Songs Deconstructed to provide unique, actionable data that supports both creatives and music industry professionals alike.”

Yael Penn, Hit Songs Deconstructed co-founder, says, “While the music industry has become increasingly reliant on traditional business metrics, such as consumption and engagement, there has been a lack of actionable data reflecting the songs themselves. ChartCipher is the missing link.”

“It all begins with the song,” adds Hit Songs Deconstructed co-founder, David Penn. “For the first time ever, music creators and executives will have access to deep analytics reflecting the songwriting and production decisions behind today’s most successful songs at scale. This unique insight, in conjunction with traditional analytics, creates a whole new dimension through which we can understand today’s hits and provides both music creators and executives with a competitive edge in today’s fast-changing musical landscape. We are excited to be partnering with MyPart to make it happen.”

“Billboard has long led the standard of music charts worldwide and we are thrilled to be launching ChartCipher with analytics for their most important charts,” Yael explains. “We’ve had a longstanding relationship with Billboard through Hit Songs Deconstructed for over a decade and are delighted to start this new chapter together to deliver even deeper insight into what’s driving today’s most successful songs.”

ChartCipher will be delivering their inaugural presentation at Music Biz 2022 in Nashville on May 11 at 12:30 PM. To learn more, visit https://sched.co/zFjs

During the second half of June, ChartCipher is launching an invitation-only beta. To be considered for beta and gain early access to the platform, please visit www.ChartCipher.com and apply by Monday, May 31st.­

MyPart is an AI-powered song search and matching platform for anyone in pursuit of songs, including the music, TV/Film and advertising industries. MyPart’s proprietary ‘Song Mining’ technology conducts unparalleled analysis of lyrical, musical and sonic relevance based on a wide technology stack that combines machine learning (AI), computational linguistics and digital signal processing,

MyPart serves some of the worlds’ biggest music companies, song funds, and ad agencies, as well as thousands of aspiring songwriters worldwide. The company is a proud graduate of Universal Music’s innovation programs: Abbey Road RED and Capitol Records’ gBeta, as well as Deloitte’s LaunchPad Growth program, and its technology won the gold award at MassChallenge 2018 and Music Week 2021 Tech Summit.

Hit Songs Deconstructed empowers creatives and music industry professionals to create and release music that competes at the highest levels through a deeper understanding of the craft and trends behind today’s hits.