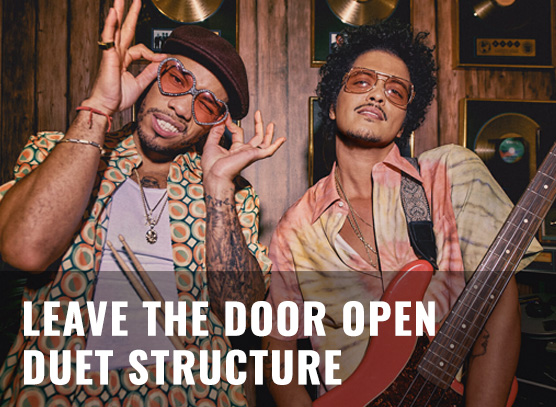 Leave the Door Open: A Case Study on Duet Structure

Leave The Door Open may be the most old school hit we’ve heard in a while, but given its recent rise to #1 on the Hot 100, it clearly has a few tricks up its sleeve that keep listeners coming back for more.

One of them is its methodical duet structure, featuring both veteran superstar Bruno Mars and Top 10 newcomer Anderson .Paak, who together form the debut duo Silk Sonic.

Sectional progression #1 encompasses the intro through the first chorus. Following the opening piano line, which instrumentally foreshadows the chorus’s song title hook, Bruno and .Paak kick off the song’s vocals in tandem with a hushed “said baby” repeated three times, which introduces both vocalists right from the get-go. The song then jumps into the first verse, where Anderson .Paak takes over the solo lead. However, in addition to .Paak’s lead, Bruno Mars is heard layered in with the background vocals echoing the lead with both verbatim and changed up lyrics. This back and forth gives the section an intimate, conversational tone that jibes with the intimate song lyrics.

Following the verse, lead duties switch back to Mars for both the pre-chorus and chorus, where he also supplies his own background vocals along with a few added layers, some of which are low-level vocals from .Paak. Now while .Paak doesn’t get his share of the spotlight here, considering Mars is notably more well-known as an artist than .Paak (nine Top 10 hits to .Paak’s one), giving his recognizable voice 100% of the lead billing in these sections, in particular the highly important and memorable chorus, was a strategic move to attract a wider fanbase.

Sectional progression #2 encompasses verse 2 through chorus 2, which progress with the exact same duet structure as the first time through (save for the addition of a lead harmony by Mars in the last line of the chorus) to create familiarity with the song’s structure.

Sectional progression #3 closes the song out with a vocal break post-chorus, final chorus and outro. The vocal break returns to the call & response flow of the verses, now with Mars singing the lead “call,” an infectious solo nonsense hook, and .Paak singing the doubled “responses.” Note that this strategy of bringing both artists in a duet together as co-leads in the last few sections of the song is highly common in Top 10 hits, with other notable examples including I Hope, Stuck With U and Rain On Me.

This duet section culminates in a final nonsense vocal line by the pair leading into Mars’s final, soaring chorus, which modulates up a half step to bring energy and emotional intensity to a climax and allow Mars to show off his famous vocal chops. And, considering Mars’s stellar vocal as well as his notoriety compared to .Paak’s, spotlighting him as the lead vocalist in the final chorus was a well-warranted choice, while .Paak’s vocal layered into the background vocal keeps things cohesive.

The song then comes to a close with a long, fadeout outro, which features a combination of recycled hooks from the vocal break and chorus sung by Mars and new melodies and adlibs sung by both Mars and .Paak. So, in addition to being a highly unique and engaging outro, which is a discussion in and of itself, the outro effectively closes the song out with both artists singing in tandem, rounding out a highly engaging duet structure and solidifying the pair’s brand new duo billing as Silk Sonic.