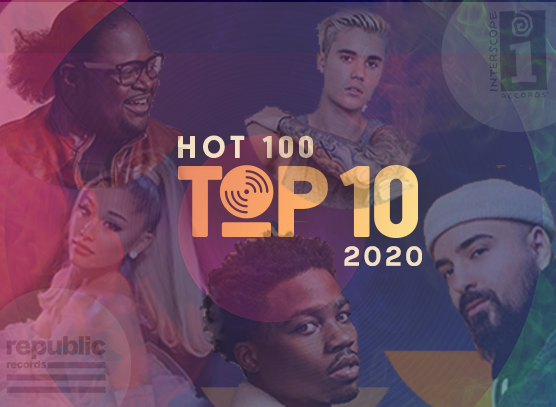 This week, Hit Songs Deconstructed published its mid-year trend report, The State of the Hot 100 Top 10, which takes an in-depth look at the compositional trends related to songs that land in the Hot 100 Top 10, as well as how the artists, writers, producers and labels behind them are evolving.

Looking at some of the top industry players, Justin Bieber was the top performing artist with four hits and 24 weeks in the Top 10. Ariana Grande also led the pack with the most #1 hits, remaining in the Top 10 for five weeks with her chart-topping duets Rain On Me and Stuck With U. The top performing song was Roddy Ricch’s The Box, which spent 25 weeks in the Top 10 and 11 weeks at #1, the most of any song during the time period. Behind the scenes, OZ and Poo Bear were tied as the top songwriters with three hits and 23 weeks in the Top 10, each. OZ was also the top producer with three hits thanks to his collaborations with Travis Scott, Drake and Future.

Interscope edged out Republic with the most Top 10 hits during the first half of the year with seven, followed closely by Republic with six overall and four #1 hits, the most of any label.

The Top 10 also saw an influx of hits that rose to prominence on the popular video-sharing app TikTok. With videos ranging from artist-driven marketing campaigns to user-made dance challenges, these hits all garnered mass success on the app before reaching the Top 10, a new phenomenon that started in 2019 with chart-toppers like Old Town Road and Truth Hurts. This year’s TikTok hits included Savage, Roses (Remix), and Roxanne.

There were also some notable compositional trend shifts in the Hot 100 Top 10. Compared to 2019:

What other shifts are we seeing in the Top 10 landscape? Download your complimentary report highlights to get a sneak peek!

GET YOUR COPY OF THE FULL REPORT TODAY!

This 100+ page super easy-to-digest infographic report will get you in tune with how today’s most successful songs, and the players behind them, are evolving.