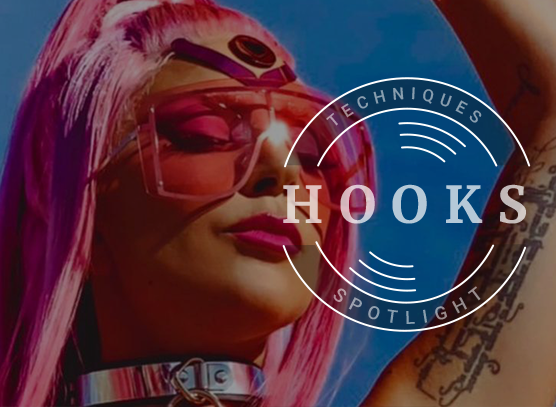 Stupid Love, the lead single from Lady Gaga’s 2020 album, Chromatica, is an electropop/dance/retro disco banger that marks a return to Gaga’s signature electronic sound not heard in the Hot 100 Top 10 since Applause way back in 2013.

The result of this collaboration is a song that is so hooky, it’s almost impossible to get it out of your head after just one listen. How did they do it? Let’s take a look under the hood to find out.

Our journey begins in the intro, where the listener is hit with one of the song’s most infectious vocal hooks right out of the gate. With its unique processed and pitch-shifted sound, this two-part earworm easily cuts through airwave clutter, grabs the listener’s attention, and, along with the sparse drumbeat, locks them into an infectious groove while simultaneously whetting their appetite for the hook’s return later in the song. Bolstering the hook’s impact and familiarity is its nonsensical lyric, which is a key ingredient in many of today’s and yesterday’s pop hits. For example, in 2019 around two-thirds of all non-hip hop Hot 100 Top 10 hits featured some form of nonsense vocal in the intro, among them megahits including Billie Eilish’s Bad Guy, Lil Nas X’s Old Town Road and Post Malone’s Circles, to name just a few.

The next stop on our hook journey is the first verse. But, guess what? It’s hookless! While its melody is infectious, the verse doesn’t feature any standout hooks for the listener to latch onto. However, considering the caliber of the song’s writers, the verse’s lack of hooks is clearly not an oversight. In fact, the benefits of the strategic omission of a standout hook in the verse are twofold – it places the listener’s focus on the storyline without distraction, and it serves as an important “hook respite,” as we at Hit Songs Deconstructed call it, within the song’s framework. Had this and every other section been chock-full of infectious hooks, the song’s impact would be diminished because there would be no anticipation for the return of hookier sections. So, the answer to the age-old question is yes – there can, in fact, be too much of a good thing. But, despite the lack of full hooks, there is one clever element that keeps the intro vocal hook in the back of the listener’s head: one note of it is played at the 15 second mark, which is just enough to remind the listener of the hook and subtly heighten their craving for its return later in the song.

Following the hookless verse, our journey takes us back into hook territory with the first of two vocal breaks. Functioning in the way of a “pre-pre-chorus” so to speak, Gaga sings, “I freak out, I freak out, I freak out, I freak out, look at me.” Not only does the melodic and lyrical repetition create a super-infectious hook for the listener to latch onto, but its fast-paced rhythm works in tandem with the lyric to cleverly accentuate the “freaking out” vibe it elicits. This is followed by two key developments: a new lyric, “I get down,” applied to the same melody, which further reinforces the hook melody with the listener in a fresh manner; and another subtle partial repetition of the intro vocal hook at the 30 second mark, once again heightening the listener’s anticipation for the hook’s full return in the chorus.

But the cleverness of this hook doesn’t stop there. The lyrics “freak out” and “get down” have a dual meaning in the scope of the song. In addition to describing the protagonist’s emotional state, they cleverly nod to 1970s disco, which the song draws upon as an influence. “Freak out” is the main lyrical hook in Chic’s 1978 disco hit, Le Freak, and “get down” is a popular disco-era term that describes what you do when listening to Le Freak – dance!

Further bolstering the impact of this repeated hook is its symmetry. The full hook is melodically and rhythmically split into shorter segments consisting of three syllables each, which makes it easier to grasp, absorb and remember:

This kind of in-line symmetry can be found in a slew of other Max Martin-penned hits such as Adele’s Send My Love (To Your New Lover) and Taylor Swift’s Shake It Off, as well as other recent earworm hits like Tones and I’s Dance Monkey:

Continuing on, the next stop on our hook journey is the pre-chorus, which hits the listener with – you guessed it – another repetitive vocal hook. The pre-chorus’s vocal features a three-way call and response structure between Gaga’s proper lead (“all I ever wanted was love”) and two prominent nonsense background vocals (“hey-ah, hey-ah” and “ooh ooh”). Together, they provide the pre-chorus, which isn’t typically one of the most infectious sections in a pop hit, with a catchy quality that stands on its own in the scope of the song. But the impact of the pre-chorus doesn’t stop there. Lyrically, Gaga’s lead, “’Cause all I ever wanted was love,” cleverly foreshadows the song title hook in the chorus, “I want your stupid love, love,” making the title hook sound already familiar when it hits and enabling the listener to more easily connect with, absorb, and remember it.

Following the pre-chorus at 57 seconds into the song, we arrive at the first chorus, which is typically the first main “hook center” in a pop hit. However, here it’s actually the third, which helps to justify its late arrival (in 2019, the average time it took to get to the chorus was 38 seconds). While the main job of the chorus is generally to summarize the narrative, in this case, the chorus also brings together the two disparate vocal hooks: one proper and one nonsense.

The proper hook is the song title, “I want your stupid love, love.” Here, the back-to-back repetition of the lyric “love” not only provides the hook with an infectious spin, but it also heightens familiarity with mainstream audiences. From Olivia Newton-John’s 1981 hit Physical (“Let’s get physical, physical”) to Post Malone’s 2018 hit Better Now (“You probably think that you are better now, better now“) and beyond, this kind of in-line back-to-back repetition has been a common thread in many pop hits throughout the ages.

Following the proper song title hook, the chorus recycles the processed nonsense vocal hook from the intro, this time presented in a new context as a background vocal to help keep it sounding fresh and engaging. Together, these two hooks provide the chorus with an infectious proper/nonsense call-and-response flow, further bolstered by Gaga’s low-level “oh, oh, oh…” vocal embellishment in the second half of the section.

The listener then gets a much-needed hook respite in the second verse following three consecutive hook-filled sections. Just as was the case the first time around, this allows for the listener’s focus to be put back on the story development while heightening anticipation for the next wave of vocal hooks. And, also like the first verse, a fragment of the processed intro/chorus nonsense hook is once again featured in verse 2, this time in a more developed manner, which both keeps it in the listener’s ear and heightens their desire for its return in full.

It’s then back to hook territory with a vocal break – pre-chorus – chorus sectional progression, the first two of which contain more partial reinforcement of the processed vocal hook, followed by another hook respite in the bridge. Our hook tour then comes to an end with a hook double-dose in the final chorus, which is twice the length of the others and brings the song to a conclusion on a highly memorable and infectious note.

While Stupid Love is very vocal hook-heavy, there is one type of hook that the song does NOT feature that’s an integral part of other massive Max Martin hits like Problem and Shake It Off: a standout instrumental hook! However, this too was likely a strategic decision. Why? Its benefits are twofold: first, the highly processed nonsense vocal featured in the intro and choruses possesses an instrument-like quality, cleverly serving the role of both a vocal and instrument; and secondly, adding an additional unique instrumental hook to the mix would have made the song too busy and diminish its overall effectiveness (again, there can be too much of a good thing). By not including an instrumental hook, the song’s simplistic accompaniment effectively supports Gaga’s stellar hook-based vocal, which is the star of the show.

As you can see, Stupid Love is a masterclass in hook MAXimization, as well as a testament to the song’s all-star team of hit songwriters, Gaga, Martin, Bloodpop, Tchami and Rise. While every aspect of the song is impeccably executed, it’s the vocal hooks and their perfectly structured arrangement that puts the song over the top, helping it to attain its well-deserved success on the charts.

This concludes our Stupid Love hook journey. Thank you for reading, and see you back here for our next Technique Spotlight installment.

Not a subscriber? Click here to learn more about the Hit Songs Deconstructed platform, or click here to subscribe and immediately gain access to our full technique library, as well as song reports, comprehensive analytics and much more.

Lyric excerpts are reproduced here under Fair Use terms, for the purposes of commentary and criticism.