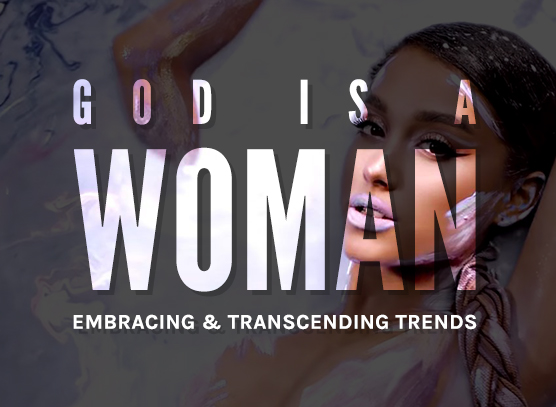 Most of today’s hits have one thing in common – they possess just the right balance of “blend in” and “stand out” factors. They possess characteristics that impart a sense of familiarity, which helps them easily connect with a wide audience, and they possess some unique or atypical quality that helps them to stand out from the pack.

God Is A Woman is a perfect case in point. Co-written by Ariana Grande and an all-star team of hitmakers including Max Martin, Savan Kotecha, Ilya, and Rickard Goransson, the song embraces current trends while at the same time transcending them.

In this article, we explore which aspects of God Is A Woman’s song structure go with the grain, and against the grain, of current trends.

Going against the grain: At just two seconds in length, God Is A Woman’s intro is tied as the shortest in 2018 along with The Middle. It simply consists of a reverse swell effect that ushers the listener into the song.

Going with the grain: Following the intro, God Is A Woman heads directly into the chorus. In 2018, close to half of all Hot 100 Top 10 hits (45%) featured a chorus preceding the first verse.

Going against the grain: While having the chorus precede the first verse was popular in the overall Top 10, it was much more common in Hip Hop songs (63%). Only 17% of non-Hip Hop hits followed this structure, which in addition to God Is A Woman include All The Stars, Havana, High Hopes, and Ariana Grande’s other chart-topper, No Tears Left To Cry.

Going with the grain: God Is A Woman features two verse – pre-chorus – chorus sectional progressions in its framework, which is a commonality shared with 62% of 2018’s non-Hip Hop hits.

Going against the grain: The two verse – pre-chorus – chorus sectional progressions are broken up by a brief two-second turnaround. In 2018, only 14% of non-Hip Hop hits featured a turnaround in their framework. They include No Tears Left To Cry, Perfect, Thunder and Shallow.

Going with the grain: God Is A Woman contains a “D” section in its framework that occurs 65% into the song, which is the norm among non-Hip Hop hits. Though the section uses the same infectious vocal hook from the preceding pre-chorus, which heightens familiarity and memorability, the arrangement shift provides a pronounced departure compared to the other sections, effectively keeping the listener engaged.

Going against the grain: The song’s sole “D” section is a pre-chorus. In 2018, only 10% of non-Hip Hop hits had the pre-chorus functioning as a “D” section, while 52% had a narrative-advancing bridge providing the departure, a section that God Is A Woman atypically does NOT contain.

Going against the grain: The outro features a multi-part structure, the second-half of which is a breakdown to an a cappella choir (entirely sung by Ariana Grande). God Is A Woman was the only Top 10 hit in 2018 that had an outro possessing this standout characteristic.

Stay tuned for our next article where we explore additional characteristics relating to how God Is A Woman embraces and transcends current trends, making it one of 2018’s most memorable Top 10 hits.