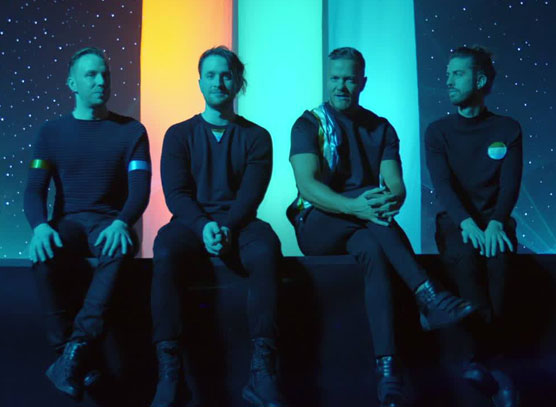 Believer: Blending In While Standing Out

Believer, the lead single from Imagine Dragons’ third studio album, Evolve, is the fruit of a collaboration between Imagine Dragons and Pop hitmakers Mattman & Robin and Justin Tranter, who have also co-written hits for Selena Gomez, DNCE and Nick Jonas, among many others. The single was released in February 2017 and, to date, has cracked the Top 5 of the Billboard Hot 100 and hit #1 on the Billboard US Adult Top 40 and Hot Rock Songs charts, where it’s been for more than 20 consecutive weeks.

Believer is a prime example of a song that connects with the masses by capitalizing on today’s compositional trends, while standing out from the pack and remaining true to the Imagine Dragons signature sound.

What follows are examples of some of the techniques that help Believer to both blend in and stand out.

Each verse stanza cleverly begins in a sequential manner, which provides the narrative with a uniquely engaging flow:

Furthermore, each of these lines possesses the same core melody, which reinforces the hook in the listener’s head as the song progresses.

The only recent hit that used a similar technique is 7 Years, which features the sequential “once I was X years old” line where “X” is an age that increases throughout the song.

The impact of each chorus is heightened by the cinematic, video game / trailer quality of the woosh and lull that span the last two beats of the pre-chorus and the first two beats of the chorus. They act as a C.I.A. (chorus impact accentuator) and provide an off-kilter moment that increases tension and anticipation between the lyrical cliffhanger at the end of the pre-chorus (“seein’ the beauty through the..”) and the resolve in the chorus (…”PAIN!”).

This technique serves to engage the listener at a heightened level and enables the payoff to hit with a great degree of impact. The return of the C.I.A. in the second half of the chorus is very atypical in the Top 10 of the Hot 100, and provides another off-kilter moment that increases the impact of the section’s final “PAIN!” proclamation. Throughout the song, each C.I.A. possesses a slightly differentiated quality when compared to the others. This helps to keep things fresh and engaging with each iteration.

Believer features a broader range of vocal delivery types than is commonly found in the Top 10, including sung, shouted, sung/shouted hybrid and sung/rapped hybrid. The employment of such a variety of delivery types on a cross-sectional basis heightens engagement, brings a vast emotional and dynamic range to the song, showcases Reynolds diversity as a singer, and creates familiarity due to the repetitiveness of the pattern.

Blending In and Standing Out Through Influence Fusion

This, along with its other mainstream compositional qualities such as an easy-to-follow structure, an effective blend of repetition and contrast and a universal narrative, helped Believer connect and resonate with the masses.

This Friday Hit Songs Deconstructed will release Believer deconstructed, which takes a deep dive into the songwriting and production techniques that helped make it a global hit.

Not a Subscriber? Sign Up for a Free Trial or Purchase the Essentials Edition of this Report.